If you had to choose just one road race to run in California, which one would you choose?

California is a big, beautiful state. Aside from the fact that there are hundreds of races taking place throughout the year, there’s also the decision of which part of the state to run in — Northern California? Southern? Or how about Central?

Here were my top choices (for a half marathon):

I ended up choosing the San Francisco (half) Marathon. When I told people, they were all like, “but the hills!! Have you seen them?!” Yes, I’ve seen them. I was worried about those hills. But I figured, go big, or go home.

I was pretty nervous about the race, especially after the challenges I faced during Hatfield-McCoy in June. But surprisingly, the hills were not that bad, and the race was amazing — in fact, it’s one of my favorite races yet. I would do it again.

I turned my California race into a vacation. I mean, I guess every destination race is technically a vacation. But for most of the ones I’ve done so far, I’ve kept the trip on the short side, ranging from just 2-4 days.

I was in California for a little over a week. I started the trip off with a few days in San Francisco (to run the race, and to see a little bit of downtown), and then spent a week in LA. Originally, I was going to drive down the coast after the race, and spend a few days in cities along the way to Los Angeles (Santa Cruz, Big Sur, Monterey). But my cousin moved out to LA at the beginning of the summer, so I changed my plans to spend more time with her.

It was a fantastic trip. It had been almost a decade since my last visits to California (8 years for SF and 9 years for LA!! Can’t believe it had been that long.) I did a lot of walking in SF (great way to see most cities) and a lot eating in LA. My cousin took me on a food tour — basically dining excursions to her favorite restaurants (mainly in Los Feliz and West Hollywood), which I will share in another blog post about my trip.

But for now… about the race!

The race was Sunday, July 31 (yes, I am verrry behind on posting this.)

I arrived in San Francisco on the Friday before the Sunday race. First stop after checking into my hotel (The King George, a block from Union Square) was the race expo, located at the Festival Pavilion in Fort Mason. Also at Fort Mason was Off the Grid — basically, a spot with tons of food vendors. It smelled really good around there! More about Off the Grid here.

The expo wasn’t too crowded when I arrived. I was able to get my shirt and bib pretty quickly.

After I got my stuff, I spent way too long browsing the SF Marathon apparel. After 45 minutes of trying to decide between a long sleeve shirt or a tank, I ended up leaving without either. In the end, I figured I didn’t really need it. I mean, how many race shirts do I have by now anyway??

Saturday before the race

I woke up and decided to walk to the start line at the Embarcadero. I figured it would be good to see how long the walk was so I wasn’t surprised on race morning. It was a short walk — about 15 minutes. Turns out, I ended up walking from my hotel to the Embarcadero and back at least half a dozen times that weekend (for lunches, dinners and sightseeing).

That morning was my first time at the Embarcadero. At first, I didn’t know that I had gotten there. I was at the entrance to the ferry station, in the midst of the famers market mayhem that was going on (pretty awesome market, by the way), and I stopped a runner to ask where the Embarcadero was.

She looks around, and says, “this is it.”

Ah, ok. I told her about the race, and she pointed to a spot on the Embarcadero where she thought the start line might be. (She was right.)

Now that that mission had been accomplished, I grabbed a coffee (from a vendor at the market) and walked to the Bay Bridge.

Ok, so don’t laugh… but at first I thought the Bay Bridge was the Golden Gate Bridge. *shrugs* Honest mistake.  I’m not from SF and no one ever told me! #blondmoments

It was a pretty low-key Saturday. The only other plan I had for the day was drinks with an old intern, Veronica, later that afternoon. She moved to Palo Alto earlier that summer to start a PhD program at Stanford. When I told Veronica about the race, she enthusiastically signed up to join me. It was her first half marathon!

I spent the rest of the afternoon wandering around the city.  I considered doing a bike tour — the one where you ride across the Golden Gate Bridge. Super touristy, I know, but it sounded fun.  I decided against it though. I didn’t want sore legs before the race. The other activity I considered was a sunset boat tour, which I didn’t do that day, but ended up doing (with Veronica and her friend) the next day, after the race.

Waking up early for a west coast race is not so bad when you’re from the east coast. You’ve got that 3-hour advantage. 🙂

My alarm went off at 3:30. I made coffee, got dressed, had breakfast, stretched, and went to the bathroom. By then, it was a little after 5 and time for me to start making my way to the start line. I wasn’t the only one out there. There were tons of other runners walking to the line, too, which was nice.

This is a big race. There were around 27,000 participants this year. When there’s that many people, you know it’s going to take a while for your wave to cross the start line. I don’t think I started until after 6 a.m.

As mentioned earlier, the race began on the Embarcadero. It’s a pretty flat area, thank goodness. I don’t think I could have handled starting on the steep inclines that San Francisco is known for. We followed the Embarcadero and ran passed Fisherman’s Wharf, Fort Mason and the Marina. Then we ran through the Presidio and over the Golden Gate Bridge and back, which took up miles 6-9. We then ran past Baker Beach and through some neighborhood-looking streets and finished off the race in Golden Gate Park.

I really enjoyed this race — it’s one of the more scenic ones I’ve done, and the few inclines on the course were manageable. I would definitely do this race again. Some people return and run the other half. If you do, you get two medals — one for completing the other half, and another medal for completing both halves of the full course, so you would end up with a total of three medals. I’m considering it. 🙂

I met up with Veronica in the park afterward — this amazing chica finished in under 2 hours! Her time was actually 1:59 – ha! So she just made it. Her first half marathon! So awesome.

I, of course, did not finish in under 2 hours. Lol. I did, however, run a faster race than expected (for it being San Francisco). I finished in 2:23 — I thought for sure that it would take me a little over 2:30 to finish. So, I was pretty happy about that. 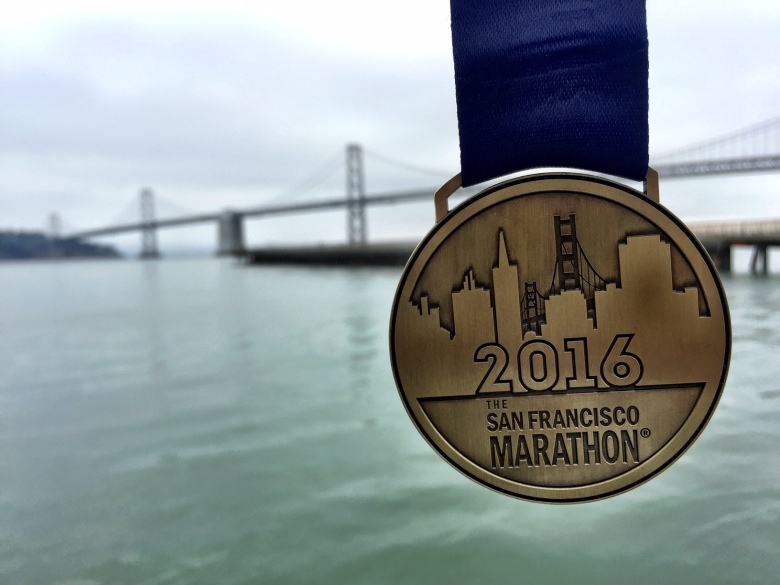 It’s been a while since my last update — I spent part of October in Cambodia and Thailand, and since my return, I’ve just been trying to clean and catch up on life. Oh! And the weekend after I got back from Asia, I decided last minute to drive to upstate New York to run a half marathon — state #17!! I’ll give you guys the details on that race, along with some photos of my California and Asia trips soonish.

Also… a big shout out to all the NYC Marathon runners that participated today! Great job!!