If you’re attempting to run in all 50 U.S. states and one of your old high school friends invites you to her wedding in Arizona, then naturally you look to see if there are any races taking place the weekend of her wedding.

Because why not kill two birds with one stone, right?

And because the prices of plane tickets these days are not cheap.

So I did a quick search on one of my favorite race websites, Running in the USA, and lucky me — I found a race taking place the day of her wedding — the Phoenix Pride Run Half Marathon! Some friends thought I was crazy for running the day of the wedding, but hey, it’s better than running the day after the wedding!

The last time I saw the bride, Harmony, was nine years ago when I visited her and another high school friend, Rachel, in Las Vegas. Even though it had been almost a decade since we last hung out, it was like nothing had changed — we just picked right up where we left off. Those are the best kinds of friendships.

I landed in Phoenix the Thursday before the (Saturday) wedding. The four days there were spent juggling wedding festivities and race-related events — it was a busy four days! But all so much fun.

The Phoenix Pride Run is an annual event organized by the Phoenix Frontrunners as part of the city’s Pride Weekend. It celebrates the LQBT community in the area. Because the race was part of a larger event, the expo included much more than your typical road race expo. There were the usual booths offering running apparel, goos and gels, of course. But there were also entertainment performances, hundreds of exhibitors showcasing a variety of food options, and an arts expo. There was a lot going on!

I didn’t spend too much time exploring because I had to get to the rehearsal reception for the wedding.

I found the table with race bibs and race shirts tucked off to the side of the expo, near the Phoenix Art Museum. It was a small set-up and easy to miss, but fortunately I spotted other runners holding race bags, so I asked them where the table was. 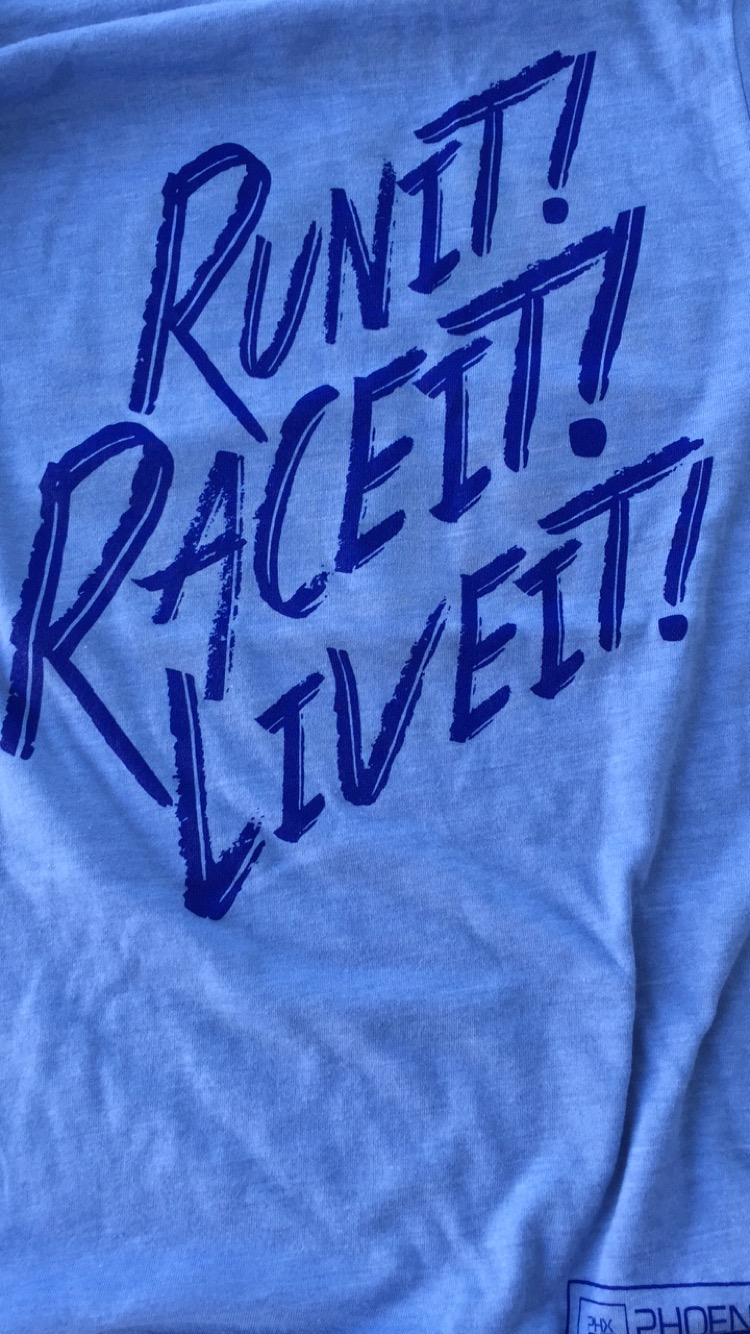 Once I got my bib and shirt, I was off to the reception!

Have any of you done the Phoenix Pride Run? I would love to hear what the expo/overall Pride weekend festivities are like since I didn’t get to experience too much of that.

I made sure to take it easy on the brews at the reception so I wouldn’t feel so crappy during the race. 🙂 Also, with a 6:30 a.m. start time, I knew I was going to have to wake up pretty early to prepare.

Alarm went off at 4 a.m. I snoozed until 4:30, before getting up to make coffee, get dressed, eat, and stretch.

I arranged for a cab to pick me up at 5:50 to take me to the start line at Christown Spectrum Mall.

When I got there, I saw a bunch of runners hanging out inside the mall — stretching, drinking coffee, pinning on bibs… They had a band play in the corner, which I loved because it helped boost the energy level in the room (and they were even playing some pretty awesome country songs!). I’m not sure how many runners participated in the race, but from what I saw at the start, there weren’t too many — I’d say somewhere between 300-400 people, so it was a nice, small race.

The start time was a bit delayed — not by much, maybe a few minutes, but because I had a wedding to get to later that day, every minute counted for me.

I was already feeling the heat when we finally started. I mean, this WAS Arizona, so I knew what I was getting myself into, but still…

I felt the heat beating down on me for the first 7-8 miles because there wasn’t any shade, and we were running in the direction of the sun. The start of the course went through the area where Christown Spectrum Mall was, and eventually led us to downtown Phoenix near the Phoenix Art Museum. The course was pretty flat for the most part… almost too flat. <gasp!> Too flat??! Could that even be possible? Yep. It is possible. Don’t get me wrong. I love flat courses. But for me, it helps to have (very) slight inclines and declines (tiny humps, if you will). They’re easier on my legs and make the run less boring.

The last portion of the race was a little better — more to see on the course (the city) and more shade.

Though it was hot, I have to say, the heat was definitely more manageable than when I ran the Hottest Half in Dallas, Texas a couple of summers ago. Wayyy more manageable. So, I was thankful for that.

The finish line was back at the Phoenix Art Museum where the post-race festivities and Phoenix Art Festival took place.

After I got my medal, I called an Uber to pick me up. Luckily for the Uber driver, because the air is so dry in Arizona, I was barely sweaty despite running 13 miles in the heat. Crazy.

I was happy to be done (and looking forward to the wedding) — this run was my FIRST half of the year. I felt like such a slacker because at this same time last year, I had already complete five half marathons. It’s slow going this year. 🙂

Also slow going: posting my race recaps! I have recaps for Hatfield-McCoy and the SF Marathon coming up! It’s been a busy summer, but things around here should be low-key for a couple of weeks. Will use the quiet time to catch up on the blog. 🙂

Hope you’re having a great summer, and getting some fantastic running in!