Did you catch the firestorm on social media last week about the New York Times’ Peas in Guacamole recipe?

They tweeted it, and it did not go over well.

Add green peas to your guacamole. Trust us. http://t.co/7imMY9c2ph pic.twitter.com/oeOMt2qgmh

People were outraged that such a suggestion would ever be made.

Watch this video from BuzzFeed. Hilarious.

President Obama and Jeb Bush even weighed in: “No green pea guacamole.”

I decided to try the recipe for myself. I like peas. I like guacamole. I like to mix stuff together. So, after my long run on Saturday, I did it.

I made green pea guacamole.

It was fine! I liked it. You don’t really taste the peas that much.

It really hit the spot after my long run. I recommend giving it a try!

About that long run…

I was going back and forth about whether to do it on a treadmill or at the C&O Canal Towpath. The day started off rainy. So, it was either ten miles in the rain… or 10 miles on a treadmill…

I chose the rain.

The C&O Canal near the Visitors Center was packed when I got there. Apparently, there was some sort of paddle and kayaking event going on.

All of the busyness made the 10 miles go by faster (more to see while running).

After about 30 minutes, the rained stopped, and it sun came out, which was nice – it made the second half of the run more pleasant.

Despite the morning rain, it was still a bit muggy. But I’m glad I made outside for my run. Definitely beats logging 10 miles on the treadmill. And I got to see kayakers! 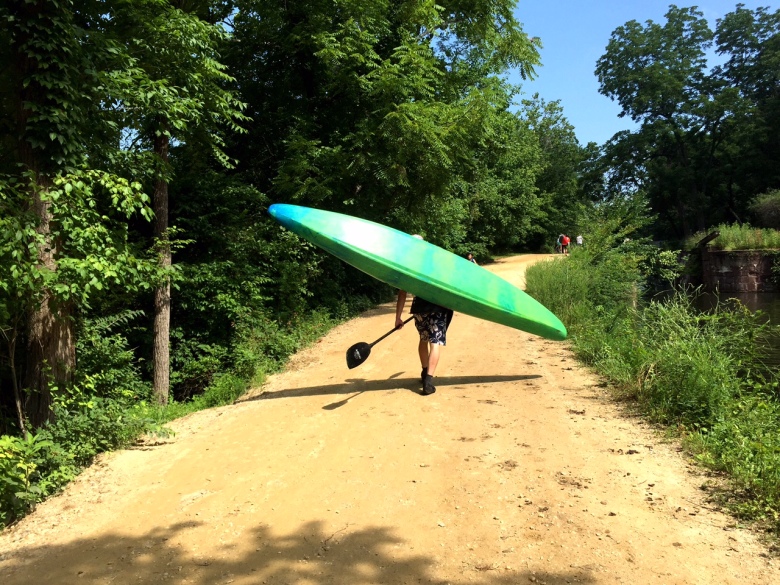