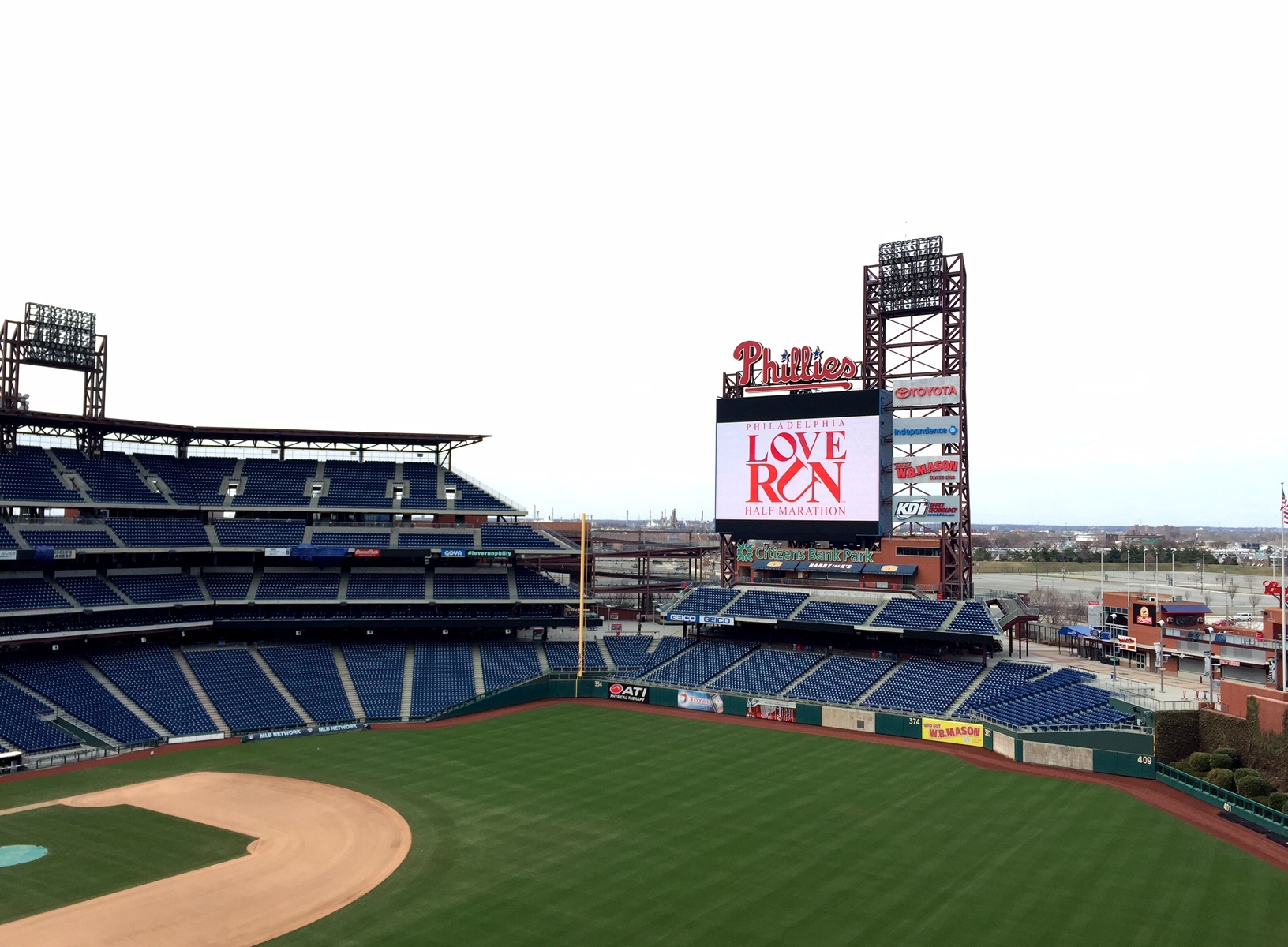 A week after my road trip to Connecticut to run the Savin Rock Half, I headed back up north for another race: The Philadelphia Love Run. Sorry, I’m a little late writing this post—the past couple of weeks have been craziness.

The trip to Philadelphia was super short, but a fun one. My friend, Jen, did the race, too, along with her friends Emily and Rachel. (Read Jen’s race recap here.) Emily and I shared a hotel room together. Always great to have company on these race trips!

I left the DC-area around 10:30 a.m. Saturday and arrived shortly after 1 p.m. The first stop was the race expo at Citizens Bank Park – home to the Phillies – to pick up my race packet and swag. It was a really cool location for an expo, just a bit chilly and super windy. Participants picked up their bibs on the outdoor upper level. The rest of the swag was located indoors.

Before going inside, I walked over to the seating area to get a photo of the outfield where I saw a little shout-out to Love Run participants on the giant screen.

After collecting my shirt, coffee mug and Phillies baseball tickets, I headed over to the hotel. I didn’t linger around the expo too long because it was so windy.

We all stayed at the Sheraton in downtown Philadelphia, not too far from the start line. I thought it was great location — close to a lot of sites and restaurants.

Jen, her BF, Emily, and Rachel were out doing their own thing, so after checking into the room, I was spent the rest of the afternoon exploring the city. It had been several years since my last visit, so everything seemed pretty much new to me.

I had a late lunch at Reading Terminal Market (a tip from my co-worker, Kevin), an awesome spot if you’re a food lover — it’s an enclosed public market with tons of food vendors and specialty shops selling ethnic groceries, baked goods, flowers, books, gifts, etc. I had a hot dog and sweet potato fries from Franks A lot (delicious), and then grabbed a cup of caffeine from Old City Coffee.

I spent the next couple of hours walking around town, checking out a few shops and taking in the city. And then I went back to the hotel to relax a bit before dinner.

My first choice for dinner was City Tap House in Logan Square, but when I arrived around 6:30, it was packed. It looked like there were a couple of events going on. So then I wandered up the street and randomly picked a place called Mace’s Crossing for dinner. It’s a small pub — nothing fancy. But apparently the place holds a lot of history. It’s a former carriage house that was built nearly three centuries ago and has outlived everything nearby.

I sat at the (tiny) bar and ended up chatting with two ladies on my right for part of dinner. It turned out they were running the race the next day, too. I love running into other runners at the bars on race trips (pun intended). It’s so fun to hear their stories. I had burger and fries for dinner – typical pub food that hit the spot.

After dinner, I met Jen, her BF, and Rachel’s BF at the hotel bar for a drink. Emily came by, too, after dinner with her brother. We stayed for about an hour before turning it.

After meeting up with the girls, we all walked over to the start line together. It was a cold morning. I definitely was not prepared for how chilly it was – low 20s. The walk helped warm us up a bit. And there was a lot of great energy among the participants at the start line, which helped pump me up.

Pretty soon, we were off.

The first four miles were flat and fast. I felt like they just flew by. The first hill came just before mile six. Jen had warned us about it, so I was prepared. It was a little tough, but I manage to run through it. The second half of the race was mostly flat, with a couple of small hills.

Overall, I really enjoyed the course. The scenery through the city was pretty, especially along the water. I could see this being a good PR (personal record) course because despite the hills, there were some long downhill stretches that made up for it. I didn’t get a PR this time, but Jen did – congratulations, Jen!

I did have a pretty strong finish though, which I’m happy about. I was feeling good at the end — not too tired or sore.

I hung out a little after the race — the post-race festivities were typical — nothing really special. Along with the bag of snacks, there boxes of giant salted pretzels for runners. They were a little hard though, so I didn’t take one.

We headed back to the hotel to wash up and change. Afterward, Emily and I met Jen and her BF at the hotel restaurant for brunch before driving back home.

It was fun weekend—short, but fun. I liked the race a lot. I thought it was very well organized, had a great course and awesome swag. I’m not sure if I would do it again, but I would definitely recommend it to others.